Cam, Joey and the Turtles 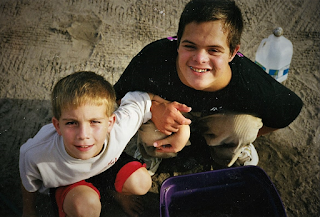 This story is by Julia Koerner, about Cameron Koerner and Joey Fairbanks back in 1999. I am posting this today as a birthday present for Cameron, who is unavailable to receive gifts right now, due to his Marine Corps obligations.

Cam, Joey and the Turtles

I took these photos on a day when Cameron and Joe were on a self-initiated,100% official turtle rescue.

There was talk around the (Royal Oaks) golf course that a small alligator had been spotted in the pond just a few hundred feet from our backyard. Groundskeepers had been looking for the Jurassic critter for a couple weeks, but had nothing to go on but golfer tales up in the clubhouse.

That same pond was actually one of Cam and Joe's favorite spots for collecting abandoned golf balls, but this one particular morning they had found a hidden nest of hatching turtle eggs.

When the boys heard tell of the baby alligator from a few golfers, they came running into the house - frantically asking for a bucket they could put their newly hatching turtles in so the alligator wouldn't eat them. 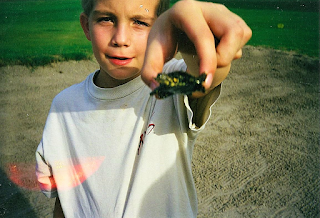 We found a bucket - and I, of course, followed them out to the spot with my broom in hand to retrieve the turtles and assure their safety from any free range gator babies that might be lurking in the rushes...and of course, bash the gator with my weapon, if necessary.

Now, 18 years later, these are still 2 of Joe's favorite photos. He posts them on his bedroom wall with a push-pin wherever we live. Joe can't remember how many turtles they rescued that day. Perhaps Cameron will remember.

That same afternoon, the boys and Mother and I made an official trip to the wildlife preserve so the boys could deliver their treasured find to the appropriate authorities and ensure the safety of the hatchlings.

You should have heard Cameron retell their tale of danger, intrigue, excitement and wonder at having watched turtles hatch; kept a look-out for the mystery alligator; collected their specimen and escaped without harm. He spoke almost all in one run-on sentence...with Joe piping in, "Me, too! Me, too!" as often as he could squeeze it in.

The rangers were amazed and entertained, to say the least! On the drive home, Mother decided the boys deserved ice cream from her favorite haunt, the Moonlight Drive In.

I'm sure you heard this whole tale first hand on the day it happened - but now, nearly 20 years after the fact, here's the photographic proof of the boys' humanitarian efforts.
Posted by Mr. Gus at 9:47 AM No comments: