In 1980 I was a missionary for The Church of Jesus Christ of Latter-Day Saints, serving in Denmark. I was 19 years old. This was a landmark period in my life where I was able to learn three important things. I learned to look beyond myself and for the first time in my life how to serve others. I learned to be on my own without the protective umbrella of my family, and I learned to appreciate my Scandinavian roots which I'd like to speak to today.

On my mission I had two name tags, one read Elder Koerner - The Church of Jesus Christ of Latter-Day Saints and the other one I had made was Ælste Kørner - Jesu Kristi Kirke af Sidste Dages Hellige.  When I wore the first name tag, people would say "What??" and when I wore the Danish version, they'd say "Hello" and never ever mispronounce my name - so I mostly wore the second. By the way, the Danish pronunciation of  Kørner in English is Kerner, which is correct.

Today is Summer Solstice (June 20, 18:34 hours ET), the longest day of sunlight during the year and appreciated at northern latitudes which takes me back to my Scandinavian roots and my mission in Denmark. While there, I learned this song and still know and sing it to this day.  It is one of my favorites of all time.  I hope my children can hear and learn it. –  I'll share it with you now, first in English and then Danish, with  YouTube performance link.

It was Written by Ove "Bager" Wulff (1917-2004) - Trained as a baker at the patisserie Bryggergården in Odense, Denmark. He was hired as a ship's baker at the East Asiatic Company. Known as entertainer, musician, show author and composer, especially for the song of Lundeborg the Lundeborg Hymn. Warning, the song is not impressive in English.  One needs to hear the Danish version in song.

Lundeborg, Denmark is a coastal town approximately 55°N 11°E, about 12 miles South of Nyborg. The song is performed on YouTube by Fynsk Harmoniforvirring, 2011. Link here.

Notes To My Inmates

I think I am the only Correctional Officer who does this. If not, like to meet other officers who do, and that have a passion for re-entry.

Everyday when I come into the dorm at 0600, at my first opportunity I leave an inspirational thought for my inmate residents. I jot it down on a piece of scratch paper and tape one copy to one side of the dorm, and another copy to the other side. I also write one more copy of it in my journal. The thoughts come from where ever - literally. Sometimes they are a quote I heard the day before, or they may come from my devotional time that weigh heavy on my heart and mind. I've been doing this ever since I started and I plan on continuing. Even though I am a by-the-book policy and procedure guy, there is no policy on this and inspirational thoughts I'm sure would be approved. The embedded images are some of the notes I get back from my inmates.

Why do I do it? As of June 5, 2016, 63% (92 of 145) of my dormitory residents will be released from their prison sentence by the year 2020. Will they be ready?  Is there anything we can do, indeed something I can do to help them in their successful re-entry back into society to help them be employed, responsible, caring and law-abiding sons, fathers and husbands. That is why I do what I do.

My guideline for notes to inmates is that it must be applicable to all. If it is religious in nature, which my notes sometime are, they must be acceptable to all faiths. The faiths represented in my dorm right now include several Christian denominations, Jewish, Islam, Wicca and Buddhism (that I know of).

This is what my last note said:

Faith and family are two things we should hold dear and value the most. What can you do today to strengthen these? A letter? A prayer? A thought? A phone call?  Think about it.

Follows is another note back from one of my inmates... 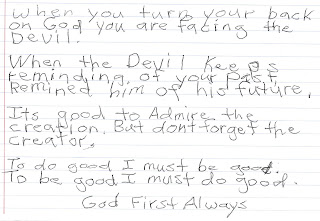 My A Dorm Canteen Poem

In the prison dormitory I wrote this for my inmates who moan, groan, weep and wail if they don't get to go to canteen. Canteen in prison is like a convenience store for us.  Items are limited and overpriced, but sometimes canteen food is better than normal prison meals.  They don't just sell food. In the canteen you can also purchase good soap, sweet smelling shampoo and deodorant - things that are not issued by the state. The canteen is also like a bank. When prison inmates pay back debts to other inmates, canteen items are the currency.  For example an inmate may say, "I'll write a letter for you for three packs of soup."

A Dorm Canteen
What will this afternoon bring?
I'm proud the dorm is so clean.
Rain may bring a mess,
But we'll do our best.
To help you get to canteen.

Everyday I leave notes in the window or speak with the inmates in a large group to motivate and encourage them to do better. To remember there is life beyond prison for most of them, and to do their best to better themselves.  Overall they are responding well to this type of encouragement, but some of my words are more accepted than others.  When I read this poem to them, they thought I was weird.

As you know the limerick is my favorite way to express short thoughts in the form of a poem. A limerick is a humorous, frequently bawdy, verse of three long and two short lines with a rhyming pattern of aabba.  These were popularized by Edward Lear in the late 1800's who wrote this:

There was a young lady of Niger
who smiled as she rode on a tiger;
They returned from the ride
with the lady inside,
and the smile on the face of the tiger.

At One With Nature, My Journal Entry

I need to set this up a bit.  Post Duty at the prison I work consists of alternating driving and sitting, always observing the facility for something that might look out of the ordinary.  Yes, it could at the worst be an escape attempt or break in, but other things that could arise too like someone wandering about when/where they shouldn't be, or simply a mechanical situation.  It can be extremely boring, driving 3.5 mph around a prison, looking at the same thing over and over for 4 to 8 hours per 12 hour shift, so I look for all that is happening around me.  In that time, I am extremely aware of the moment, noticing every sound, movement and potential smell.

This time allows me to get close to the surrounding nature as well.  Our facility is close to nature, so I get to see all kinds of animals which is always a highlight for me.  Here's my entry... 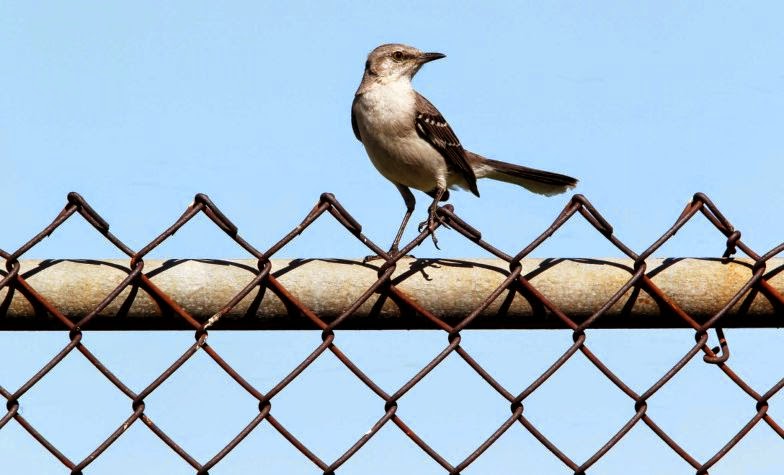 On Post duty, sitting in the car outside the prison, and get this! For the last 10 minutes I have been mocking the calls of a Mockingbird, just 10 feet away sitting on the razor wire inside the fence. (Whistling as I write, and I can hardly do so) This little guy goes on with a tune for a few seconds, then I mock him, and he mocks me.  It's incredible!  Never felt so one with nature, or experienced this before.

Also earlier on the other side I saw a brand new spotted baby Whitetail fawn and it's mama, still wobbly-legged, cute as could be.  I also saw tonight on this shift a big raccoon, I call Edgar, a possum, a Swamp Rabbit, and the other night I actually saw a mole, not on me, but the mammel kind about the size of a mouse, with a long nose.  These little guys dig in the dirt for grubs, and are famous for tearing up residential laws.  It's 6:30am now, and I'm observing a big black feral hog, digging up the ground, probably a 150 pounder.  Gotta go now, next shift employees beginning to arrive.

Nature surrounds us everywhere, if we'll only just take the time to stop, be still and observe.  What a great opportunity to count our blessings; realize an appreciate these spectacular creatures God has blessed us with.  Solitude can be our friend if we let it.
Posted by Mr. Gus at 7:00 PM No comments: