Testing of Our New Rocket Stove 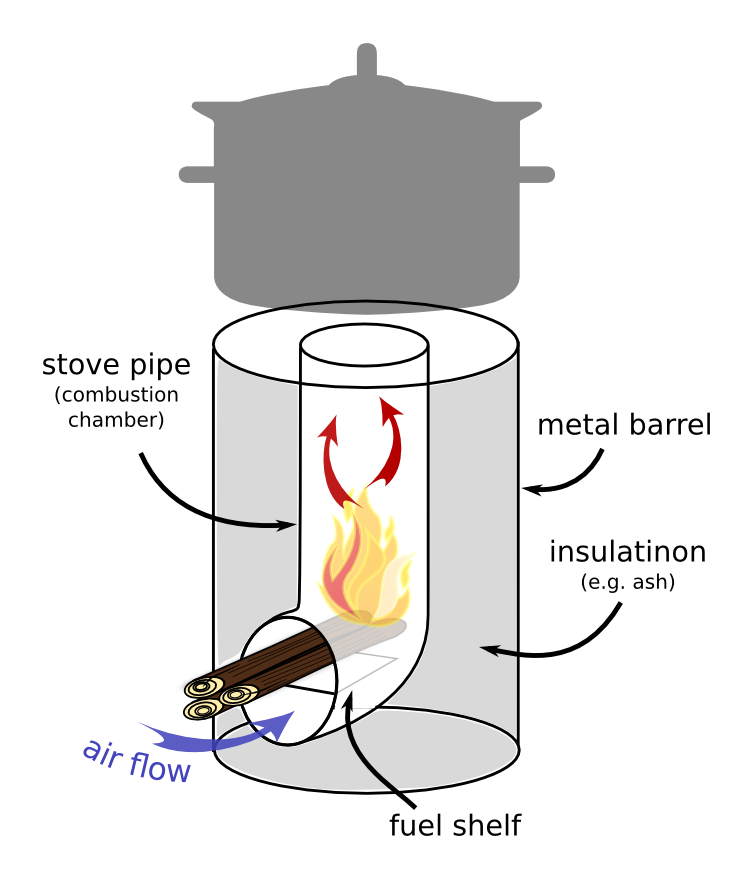 Back in January I was introduced to the Rocket Stove.  It is a hand made, economical, very efficient cooking and heating tool. The principles were described by Dr. Larry Winiarski from Aprovecho in 1982 and stoves based on this design won Ashden Awards in both 2005 and 2006. Interest in rocket stoves has led to the development of rocket mass heaters and other innovations. Source and photo (left) by Wikipedia, Rocket Stove.  They are available to purchase, but can easily be built with local materials at a fraction of the cost. I don't want to under emphasize the value of how little wood this stove uses.  It has allowed people in remote African and South American countries to use small sticks, leaves and grass to cook and heat for their families and not have to wander into dangerous remote areas to collect large amounts of firewood. 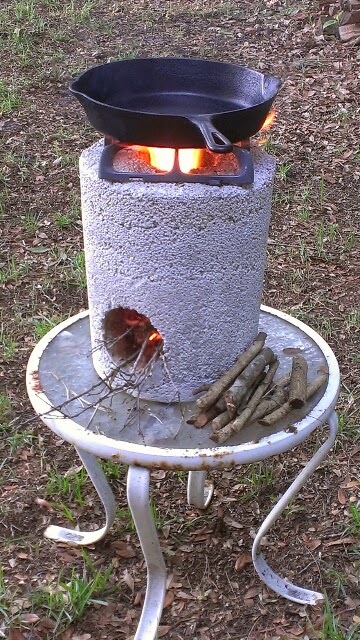 I built mine with materials purchased a the local home center, some scrap 4 inch PVC pipe, cut at a 45 degree angle and an old 5 gallon bucket.  I spent about $30, for materials enough to build two stoves. I followed the instructions from Gene Lonergan on YouTube when I made the stove. I mixed my Cement/Perlite mixture at 8:1 by volume using an empty coffee can and a wheel barrow. If I did it again, I would use 6:1, decreasing its thermal conductivity a bit and increasing its mass and structural stability.  As is, the weight of my stove is about 6 lbs, and as you can see from the photo (right), is light enough to sit on a glass table without worrying about breakage.  Also notice that it is the shape of a 5 gallon bucket.

Cooking with the stove.  For free, I was able to get gas stove grates from the local scrap yard to place on top of the stove, and underneath the cooking surface to allow for adequate air flow.  With the handful of dried sticks shown, Sandy and I were able to cook a meal of Blackend fish in the cast iron skillet. 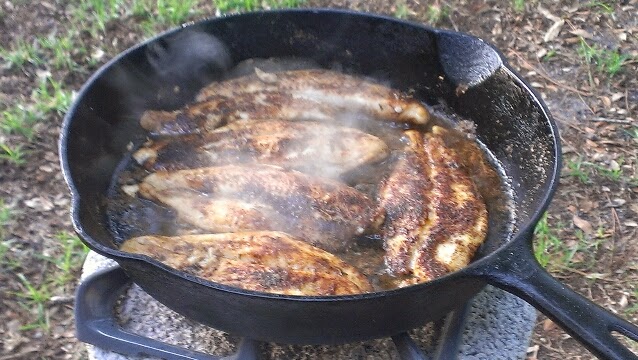 One thing I need to add is this is not a coal burning fire!  Just the opposite.  It is a voracious wood burner, but in very small amounts.  It is best to use longer sticks than the ones I used, so as to be able to feed them into the fire.  We kept stoking the fire to provide a continual hot fire throughout the cooking process, and when the meal was done we stopped the wood feed.  After that, the fire was virtually out in 10 minutes.  At no time did the table or sides of the Rocket Stove come even close to warm to the touch.  The insulating properties of the volcanic Perlite responded as predicted.

For survivalists, naturalists and those interested in inexpensive sustainable energy tools and resources, the Rocket Stove is a Top 10 innovation in my opinion!
Posted by Mr. Gus at 7:37 PM No comments:

This is a continuation, Part II if you will, of my original story Limericks on March 30 of this year... I can tell you right now, there will probably be several follow-ups to this!  What can I say?  I'm a nerd.

Why I Love Limericks
I love limericks no ending.
They rhyme 'round a tree's always bending.
They're short and so sweet.
But longer than Tweets!
My thoughts and my feelings extending.

This was 157 characters w/spacing.  I need to create the Tweet-able  > 140 character limerick!

The Family Bookkeeper
She used to use the name Swift.
She's a master to the definition of thrift.
She saves us the nickels,
So there's always a pickle.
And we're never a ship that's adrift.

Thank you honey for watching our family finances.  I love you.

I Miss My Kids
In Florida there are tall, bushy trees,
And some that are short to your knees.
I miss my kids bad.
Because I'm their Dad.
In they're activities I'm always so pleased. :)

I know the transition here is weird, but I live in sunny Florida and my kids live across the globe in China, California, Florida, Texas and Utah. Texts, calls, Skype and Facebook are how we communicate - the 21st Century Family!

A Tribute To Harley 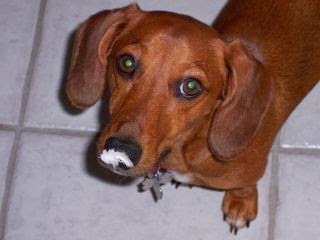 I talk to him when I'm lonesome like;
And I'm sure he understands.
When he looks at me so attentively,
And gently licks my hands;
Then he rubs his nose on my tailored clothes,
But I never say naught thereat.
For the good Lord knows I can buy more clothes,
But never a friend like that.

If my dog is barred by the heavenly guard
We'll both of us brave the heat! Both poems by W. Dayton Wedgefarth

The Dachshund's affectionate
He wants to wed with you:
Lie down to sleep,
And he's in bed with you.
Sit in a chair,
He's there.
Depart,
You break his heart. 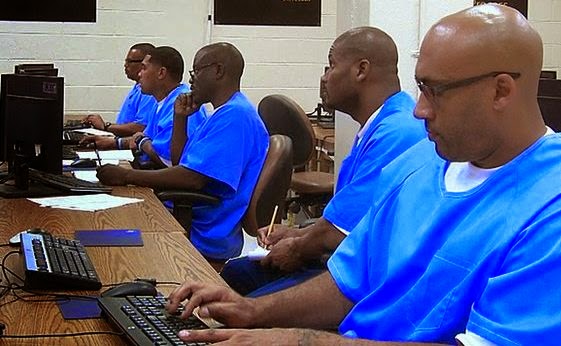 I've been working for Florida Department of Corrections since October 2012, in Transition, Security and now Education. Following, are some thoughts on what I have experienced. My writing may seem to soften or humanize the inmates in the prison setting, but I am looking at the big picture as I write this. Some of the inmates have done some truly horrific things, all of them some really bad things, or they wouldn't be in prison!   Just last week, one of my best Inmate Teaching Assistants put himself into Protective Management because he got beat up and his watch stolen. This past weekend three inmates from my institution went to the hospital due to stabbing related incidents.  This isn't secret news I'm sharing, it was on the front page of the Daytona papers.

Also be sure, I intend no disrespect to the officers, or administration in this post.  They do the best that they can to protect all inmates, security, civilian staff and the public. The image above is from California (see photo credit below, used with permission), but it is a likeness of my institution.

Working With Prison Inmates
Working in the prison system has caused me to realize
the value of the individual in God’s eyes.
The rough exterior of the inmates is usually a facade,
to mask the guilt, pain and shame of crimes they've committed.
If one looks beyond the sea of blue clothing
and into the eyes of the individuals,
you’ll see they may have been acquitted as criminals by God,
but not by the state and usually not by themselves.

Re-Entry, transition and betterment are the clichés of the system,
but it does not address the needs of the victims;
not excluding the scars left on the families of those incarcerated,
when their sons attempt to become exonerated, by fulfilling their obligation to the courts.

It is our job as corrections staff to uphold safety and order,
while at the same time maintain a border of impartiality and professionalism.
Care, but not too much. Custody, but doing so humanely. Control, but not degrading.
All the time crusading, for maintaining the dignity of the individual,
the organization we represent, and the One who called us to this important position.

Photo Credit Link Many thanks to the CA Department of Corrections..

This post is written only from my opinion and experience.  In no way does it express the policies, procedures and management policies of the Florida Department of Corrections or the State of Florida.
Posted by Mr. Gus at 5:40 PM No comments:

I cannot let this Easter day pass by without writing what it meant to me.  After all, it is the day our Lord was resurrected, arose from the dead after three days in the tomb.  He is risen!

This had been one of my most memorable Easter seasons in my life, starting with Ash Wednesday.  On Ash Wednesday, we attended a service at church and departed with a charcoal cross on our foreheads, having made a Lenten sacrifice i.e, "giving up something" for Lent.  I gave up nothing.  Instead I took on a daily devotion to the process and leading up to the crucifixion of Jesus Christ. 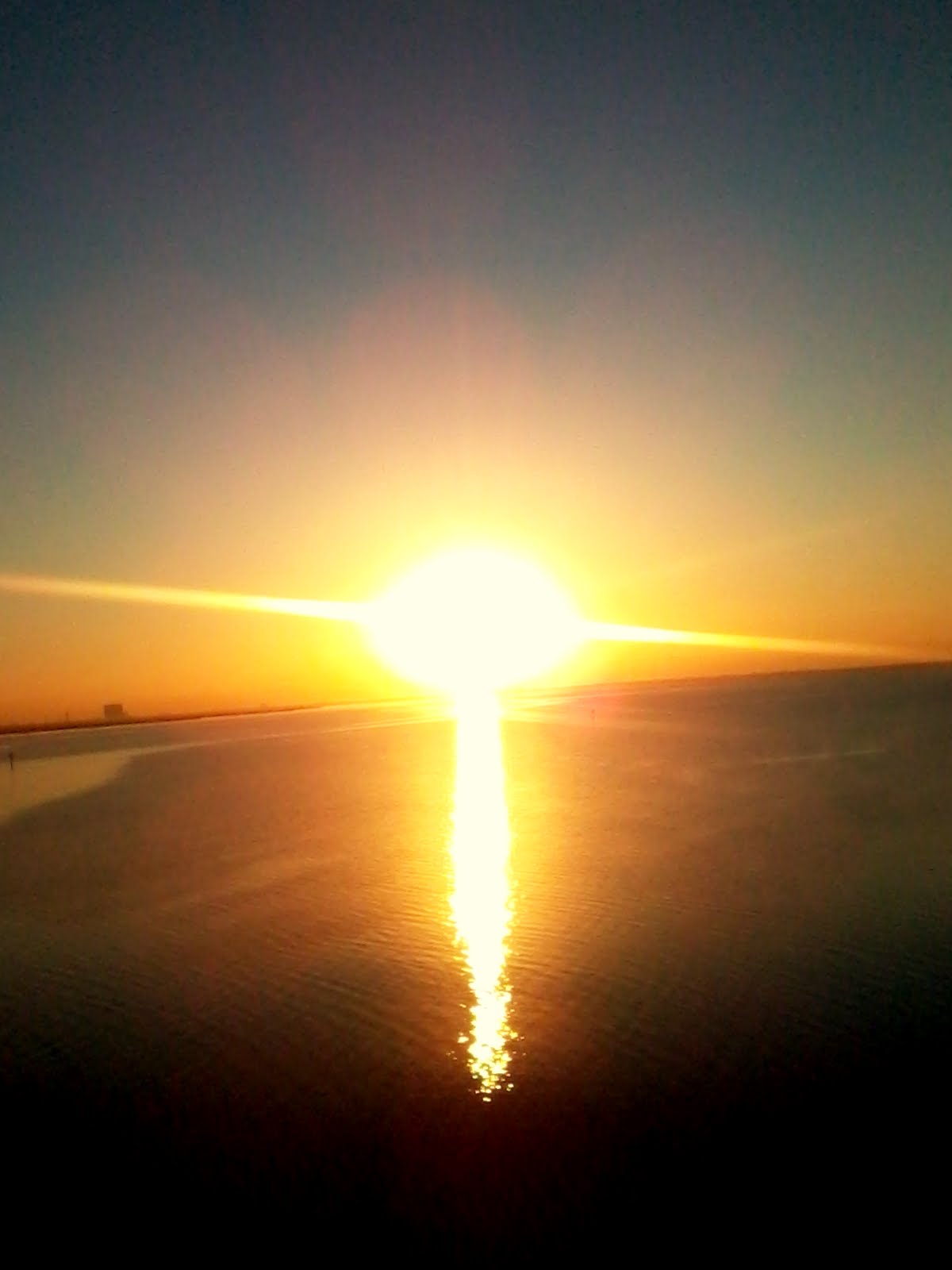 This has been a 40 days of inner reflection and thoughts of the future and the past.  I've asked questions such as why has God called me to teach in prison?  How can I have a positive impact on my students, in not only attaining their G.E.D., but on the rest of their lives? Is this a calling or just a job?  Are my Mom and Dad proud of me and are they watching over me?  Or are they just dead?

How am I supposed to serve in the ministry?  Should I just keep serving as a Lay person or become ordained as a Methodist minister?  How can I have a positive impact on my children when they live so far away?

Does every Dad and person contemplate these deep questions or similar?  I don't know.

As Easter comes and goes, soon it will be summer and the clock keeps ticking, and the calendar turns over day by day I will continue to reflect.
How do I make the Easter season of 2015 come alive for me? Where am I supposed to go with it, and what can I do to share the love of Jesus Christ to my neighbor next door and the prison inmate closed in behind razor wire?

Side bar - there were two inmates stabbed at my workplace today according to the news.  I don't know the story behind it, but it has affected my Easter Sunday in a way that few can understand.

Keep following along with me and experience my journey with me.  I'd like that.

Photo Credit: My wife Sandy from the Max Brewer bridge in Titusville, FL.  Used with permission.
Posted by Mr. Gus at 8:22 PM No comments: