Just Before the Last Supper

As Good Friday approaches I contemplate the last days of Jesus Christ before he was crucified.  In particular this year, I have compassion for Judas, yes the Betrayer of our Lord.  If he had not given Jesus up to His pursuers, someone else would have and then we would be blaming them.  Was Judas a necessary part of the eternal plan?  I don't know.  How did he feel afterwards?  (I'd love to read your comments on this.) 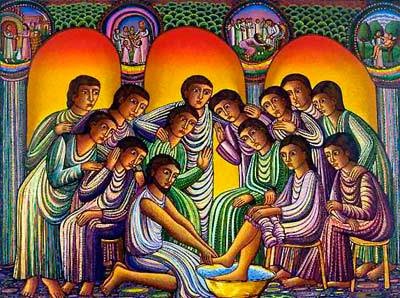 The Gospel of John 13:1-2 (NRSV)
Now before the festival of the Passover, Jesus knew that his hour had come to depart from this world and go to the Father. Having loved his own who were in the world, he loved them to the end. The devil had already put it into the heart of Judas son of Simon Iscariot to betray him.  Shortly after this, Jesus washed the feet of the disciples and broke bread with them, knowing in advance of the betrayal.

I wrote this poem, considering the plight of Judas Iscariot, and the guilt he must have felt.

"Cinder blocks tied to my ankles, ropes bind my hands.
I sink below the surface, feet down to the sand.
I stretch to reach the light above.
Gasping, but not enough air.
God help me up and free me, out of this despair."

I'd also like to share some of the words of this song How Can It Be, By Lauren Daigle which is popular right now on Christian radio.

I am guilty
Ashamed of what I've done, what I've become
These hands are dirty
I dare not lift them up to the Holy one
You plead my cause
You right my wrongs
You brake my chains
You overcome
You gave Your life
To give me mine
You say that I am free
How can it be
How can it be

I cannot leave this story on a guilt laden note of sorrow, because it does not end there!  The story continues in John 13:31 to verse 35 and gives us The New Commandment...Just as I have loved you, you also should love one another. By this everyone will know that you are my disciples, if you have love for one another.

Jesus shows His disciples, even Judas Iscariot and Simon Peter who betrayed Him that His love was greater than the price of their betrayal.  Shouldn't we do the same?  Can I do that?  God please help me, not for my sake, but to follow you and be a Christ example to someone who does not know Him.
Posted by Mr. Gus at 6:22 PM 2 comments:

I've been obsessed with limericks lately, starting with The Pelican, which I think I found on NPR, and it became the impetus of my sudden rhyming enthusiasm.  This jewel was written by Dixon Lanier Merritt, in 1910, and it moves me so in such a funny way, it causes me to think in rhyme, all the time!  After The Pelican are my own which I came up with in the last two days inspired by events in my life. I think I'm finished now.

The Pelican
A wonderful bird is the pelican,
His bill will hold more than his belican.
He can take in his beak
Food enough for a week.
But I’m damned if I see how the helican.

Now here are mine...

The Fid (a tool for rope work and knot tying)
My Fid has been missing for weeks,
I found it tonight with much glee.
It was right where I laid it.
I'm glad cuz I made it.
I use it for knots that I keep.

My husband he lost his best Fid,
Then blamed everyone and the kids.
His mind he's a losin',
For simply not choosin',
To remember the things that he did!

Pillow Thief
I now have a wife who's a thief!
She never causes much grief.
My pillow she'll take, Before I awake.
She denies it in great disbelief!

Covered Dish
Oh the joy of community eatery!
Enjoying each other so leisurely.
The dishes diverse,
We sit and converse.
Getting to know one another so easily.

Slumber
My sweet wife is sound asleep.
She lies in a slumber so deep.
But soon she'll awake, and coffee partake.
She's a blessing to all whom she meets.

Misbehaving Students
In prison they come to my school.
They can stay if they don’t act the fool.
If bridges their burnin’ they don’t get no learnin’
That is the primary ground rule.

Mean Ramona
There once was a man from Daytona,
That married a bike chick Ramona.
He rode on the back, but she cut him no slack,
And dumped him on this side of Pamona.

Old Mr. Forte’
I wonder how old Mr. Forte’ has been?
Since ‘76 he’s been in the pen.
The sweetest man you've met in your life
39 years now for killing his wife.

Squirrel Chaser
Harley chases with fleas on his knees.
All of the squirrels plum up the trees.
All he wants to is play, but he never will say,
The squirrel language version of 'please'. 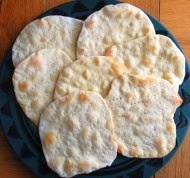 2 cups White Flour, unbleached all purpose
2 Tbs Olive Oil
1 tsp salt
3/4 cup Water
Preheat oven to 450 degrees F. Mix well all ingredients in a medium size bowl by hand or with an electric mixer until a stiff dough forms. Remove the dough to a lightly floured countertop, kneading until a smooth consistentcy.   Bake for 8 minutes, flip the bread over on the pan, bake for about 8 more minutes.
Posted by Mr. Gus at 8:17 PM No comments:

I am now teaching Family Firearms Safety for donations only.  A typical class of this quality and quantity of information by a Certified Instructor is about $75 per person.

If you have firearms in your home, and don't know much about them, this class is for you! If you cannot afford a class?  No worries.  I can assist you with no charge or agreeable terms.

If you're interested, get a hold of me.  My email address is guskoerner@gmail.com.  I also teach by distance learning (Skype). Typically I will come to your home, or you to mine and talk about family firearms safety.  I have youth appropriate DVD's as well. This class is centered on age appropriate, hands-on materials for the children of your home AND satisfies the Florida requirement for the Concealed Weapons Permit.

This is how it works.  When firearms are in the classroom, they are always locked, or otherwise inoperable, and there is NEVER any ammunition present; the cardinal rule of firearms instruction.  I am successfully security screened by the Florida Department of Law Enforcement, Florida Department of Corrections and Brevard Public Schools and can show credentials upon introduction.  I am a former 4-H Youth Development Agent and Instructor for the Florida Fish and Wildlife Conservation (Game) Commission.

This course description below is typical, but I also teach rifle, black powder firearms and non-certified archery and shotgun.  Below is a description of one of the courses I teach.

FIRST stands for “Firearm Instruction, Responsibility, and Safety Training”, a program the NRA developed to meet the need for a firearms orientation program for new gun purchasers. This FIRST Steps program is a basic courses abbreviated to the most fundamental shooting skills, and the specifics of a particular model of pistol.

This course, because of its narrow focus, can be completed as quickly as three hours. Students will get quick practical lessons on the safe use, cleaning, and storage of their pistol. The practical exercise covers a single pistol shooting position.

Course Goal
“To provide beginning shooters with an introduction to the knowledge, skills, and attitude necessary to own and use a specific pistol model safely.”


Prerequisites
The are no prerequisites for taking this course, and the material is accessible to appropriately supervised mature children.
Posted by Mr. Gus at 8:08 PM No comments: