A Cliche Saved My Life

Most people dislike cliches because of their nature; trite, over used words and phrases. But one for me stands out, which is “go with the flow”. Stay with me, because that phrase literally and figuratively have saved my life. Throughout my career employers have used this phrase or its related forms, such as “adapt”, “embrace the change” and “this is the new normal” to express major changes in an organization, usually due to management turnover or budget cuts. 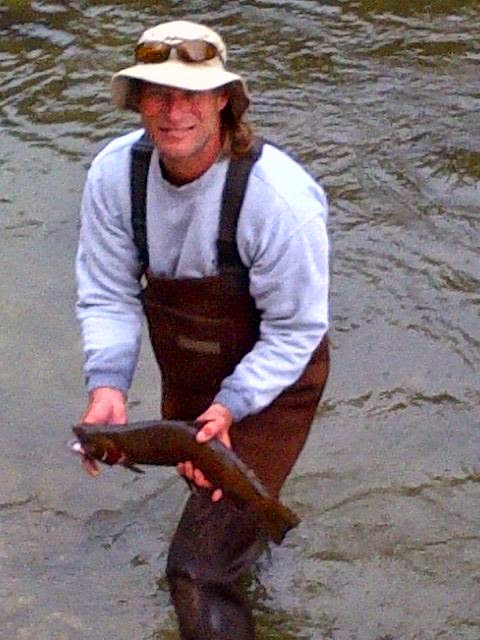 I gotta tell you a story about how this “adaptation” literally saved my life. My buddy Jim (pictured right) taught me how to fly fish. So once I felt pretty confident in my gear and skills, I took off to a part of the Little Bear River in southern Idaho to catch some fish. I think it was late June, when the water is still frigid cold, but the mountain run off has slowed down enough to see the rocks in the shallow places and near shore.

I got my gear together the night before, tackle, waders, cooler, etc. and the next morning I stopped by Burger King and picked up two 99 cent whoppers, one for lunch and one for on the way home and tucked them under the seat of my car. I arrived at the rivers edge about 11am and the call of the river beckoned me to hurry, yet I was enjoying the view of the mountains and greenery of my surroundings.

As usual, one hardly ever gets a bite on their first cast so I tried and tried, moving up and down the shoreline, moving out into the deeper water current as I went. Then suddenly I took one step too far into a drop-off that went over my head. My waders instantly filled with ice cold water and I found myself being sucked in deeper and faster! It was at that instant that I thought “go with the flow”. Thinking back, I consider it now one of those “God moments” when panic left me and was replaced by peace and rational thought. So instead of fighting the ice cold current, I raised my rod over my head and let the river push me downstream which naturally led me to a shallow bend where I was able to walk out and compose myself.

If I had fought the current and tried to immediately get to high ground I might have perished. But, instead I was willing to go a bit out of my way following the flow for a hundred feet or so and come out just fine.

So what’s the moral of the story? #1, don’t fish alone in the wilderness where nobody knows your whereabouts, and #2, the longer way, or new, different way than you insist upon may be a better way for you to go. Counsel with family, friends, those wiser, and especially God before we make up our mind on how things have to be, “God’s ways are not our ways…” and situations may turn out better than we expected.