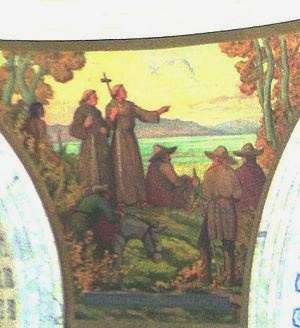 I'm obsessed with learning more about the Spanish explorers who lived, explored, traveled and mapped the southwestern United States, in the Utah, Colorado, New Mexico region; specifically the southern Utah desert.  (Why do Franciscan monks always come up for me??)  The Escalente' Expedition were dedicated Christians and Catholic Franciscan monks, (Wiki photo, left) who tried to convert native Americans, but had the outdoor and mapping skills comparable to Lewis and Clark, but came before him in the 1770's.  The flintlock gun era.  I must research their journals!!  Someday I shall return to my most memorable place on Earth, which I call Solace Overhang.  It is located on the banks of the Escalente River at N 37.77445, W 111.42385.  Dead or alive, I shall return to that spot where I spent seven days alone in September of 1979, with nothing but a wool blanket, a coffee can, a pound of mixed wheat and corn flour and a half-dozen honey packs.  It was by far, the most influential time in my life where the only thing I could do was survive and reflect upon my life.  The only friend I had to speak to was my own conscious and God.  Occasionally I would explore and see a rabbit or a rattlesnake, but most of my time was appreciating the rocks, stars and cool stream a hundred yards away.  I would reflect upon my life thus far, and what the future may bring.  I was a naive nineteen year old with my life in front of me.  It was at that point, where I crossed from being a boy to a man, and the first time in my life seriously acknowledged God's grace in my life.  I also realized that the universe was much larger than I had imagined, and that spiritual life was more than a religious upbringing, or a church and didn't necessarily have to do with any particular religion or dogma.

I'll never ever forget laying on the ground under my overhang, covered by my woolen blanket next to my personal fire.  Even though I could feel warmth from the flames, I was still very very cold.  I would just lay there and wait for sunrise.  My body was facing North, and I had a clear view of the North Star, and the Big Dipper just beside.  Through the embers of the firelight, I would lay there and watch the fixed Polaris, with Ursa Major pivoting around it, completing a near full circle.  As the Big Dipper came close to the horizon, I knew that dawn was eminent, and I would soon feel the warm sun rays.  At dawn, I'd walk down to the Escalente River and fill my coffee can.  On the way back up the hill, I would collect some sprigs of Brigham Tea, Ephedra viridis, and then prepare a breakfast of ashcakes and warm tea to start my day.  For the first four days I had a little honey to put on my cakes.  At 37-111 (lat/lon) were my first experiences of heaven.

I thank God for that wonderful experience, parents who encouraged me and help make this happen, and for the people who ran the program, specifically Larry Dean Olson, author of Outdoor Survival Skills, foreward by Robert Redford, ISBN 13: 978-1556523236, the founder of BYU's Youth Leadership 480 program, and my class D-12.  I would also like to thank my program director Doug Nelson and my local Fort Worth buddy Bobbie Baird.  I also have to thank my father,Karl L. Koerner who was a course graduate in 1976.  This program is still ongoing, but under the direction of Boulder Outdoor Survival School, or B.O.S.S.
Posted by Mr. Gus at 10:49 AM