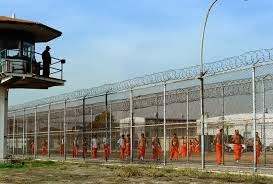 I wrote this on post duty the other night. Post duty at a prison is driving around the outside, very slowly and making sure everything is secure. If by chance there was some movement or disruption to the electronic sensors, the officer would investigate and call the results in by radio. A rabbit in prison, is slang for an escapee, and the Rabbit Run is the area between the two outside fences. Each fence is usually about twelve feet tall, and covered from top to bottom in razor wire. Here's my song, just need to set it to music...

Headed down the rabbit run, a hundred miles an hour. One eye on the prison guard, the other on the tower.

They locked me up in 2004 for robbin' a convenience store.  I didn't wanna shoot the guy, but at that second it was him or I.

Sittin' here with all my friends, never going to make amends. My Mama cries both day and night, that's why I'm gonna make this flight.

If I can make it underground, I'll avoid the cameras or take a round. Don't wanna climb that thorny wire, it'll spill my guts before I tire.

Headed down the rabbit run, a hundred miles an hour. One eye on the prison guard, the other on the tower.