Here it is 2012 and it seems like there's an abundance of outdoor programs to choose from.  There are more than there was ten years ago.  That's probably because of the educational studies that have come out in response to what's now known as Nature Deficit Disorder.  Are more individuals and families participating in these programs because of this child malnutrition of outdoor experiences?  It doesn't appear to be the case.

Something is still keeping the kids inside, and parents don't really seem to care - for the most part. The result is a host of youth not having a thorough knowledge and appreciation of wildlife, living in the outdoors or how crucial it is to preserve our nation's natural resources.﻿﻿
﻿ 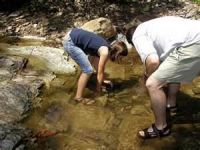 When I was a boy I loved being outside, mostly because there was nothing to do inside! In 1967 when I was eight we didn't have home computers, video games or more than six channels on the black and white TV set. Even the channels we did have came in fuzzy. Occasionally I did go down to the creek and catch crawdads. Photo credit flickr.com

In order to keep me from driving my parents completely nuts, they enrolled me in Scouts. Of course I didn't have any real opinion about it, I'd just did as I was told because I was eight, but I did have fun. In Cub Scouts we did mostly crafts with the occasional outdoor event. When I became a Webelos Scout (age 10), we started to camp, but then as a full-fledged BoyScout we were outdoors most of the time, especially in summer.  Out of the 20 some-odd merit badges I received, a good portion of them were in skill areas of hiking, camping, canoeing and similar.  Through the merit badge program, I learned real outdoor skills some of which I can still call up and use even to this day!
When I was 19 I attended the Brigham Young University, YouthLeadership 480 course (now managed by B.O.S.S).  That was my one and only BYU class.  YL480 was an evolved course originally designed by the great survivalist Larry Dean Olsen, to help reform troubled youth offenders.  In the class we spent 30 days in the southern Utah desert living off a pocket full of minor supplies and gathering the rest from a less than abundant supply of plants and an occasional aquatic critter from a creek bed.  On one segment of the survival excursion, we were granted 1 red shiny apple, and to this day I still eat ALL of the apple but the stem.  I am also still known to eat a bug now and again.  I digress.

In my later associations with 4-H, we  had a good share of outdoor activities, but no hard-core outdoor programs in "roughing it" type camping in that sense, at least in my geographic region. 4-H environmental and camping programs such as fishing, shooting sports and kayaking were (again, in my experience) are mostly day activities with cabin lodging or going back home in the evening.  In that job, I was a paid Youth Development Agent and we did teach some really neat skills, but the focus was more on developing well rounded leaders and citizens, and less on the skills.
I think people trying to answer the question about why teach outdoor education will mostly come from a philosophical perspective like, "giving an appreciation of the outdoors, or of what it’s like to…”, etc.  In my honest opinion, the value of learning ONE outdoor skill really well, will give a child something they can use later, perhaps as a necessity.  For example, if a child learns to start an outdoor fire with natural (local) materials, and just one match (or no matches!), that skill may come in handy later in life.  Now add to that skill another, like building a woods shelter, or purifying water, a child will begin to gain a sense of self-reliance, and confidence that they will carry on for the rest of their lives and probably build upon themselves.  In the meantime, while learning these specific skills; they will see deer and other wild animals, and unspoiled land and appreciate the setting.  They’ll remember and know why our forests, wild lands and waters are important and will naturally grow an attitude of ecological stewardship that they hopefully will try to pass on.  So I guess, the bottom line for me to teach outdoor education, is to impart new skills primitive to them, to teach self-reliance and connect kids to our ancestors by stories,  people who did this out of necessity, while building self-confidence and esteem.

I think I’ll sleep outside sometime this week.
Posted by Mr. Gus at 8:00 AM