A day on the water celebrating family and freedom.

I think yesterday was one of the most enjoyable 4th of July holidays I've ever had!

We got to spend a day on the water with our kids, with the excitement of an afternoon thunderstorm, followed by the opportunity to see my daughter and granddaughter Maddie who's been in China for the last year, and ending the evening with the Titusville hometown fireworks show with our good friends Jeff and Julie Holton.

After having the boat sit in the yard since 2009, it took a little bit of work, but we finally got our Hobie Wave up and running. We worked all the previous weekend getting it ready, and Tuesday after work got it out onto the water for a test sail. We had a little trouble getting into the groove of putting up the 20 foot mast, but we did it. We made it to the banks of the Indian River (Intercoastal Waterway) in Titusville about 7:30pm, and managed to sail around a nearby island and get back right as it was getting dark. The temperature was in the 80's I think, and winds were about 7 mph.

Sailing is such a wonderful sport and skill to learn. When ever I go out, I always think of the early explorers who navigated the seas and tamed the elements to survive and discover new lands, being away from home for years at a time. My Dad taught me to sail before the age of ten on an El Toro dingy, and with a little practice I was able to master the skill enough to go out by myself by the age of 14 or so. I've loved it ever since, and it has prompted me to learn other associated skills such as knot tying, the mechanics of ropes and pulleys, navigation, and reading the weather. Similar to the other sport of archery that I love, a complete novice can have a lot of fun but to master the sport can take a lifetime of learning the different aspects.

On the morning of the 4th after sleeping in a bit and getting our gear, food and drinks ready Sandy and I headed out to the river again with the boat and found a good spot to launch. One of the great things about any Hobie Cat, is that you don't need to put in at a boat ramp. In fact, it it much easier to leave the rest of the boating crowd, set up and launch from any sandy shoreline. This time the winds had to be only about 3-5 miles per hour, and the sailing was pretty slow. Sitting still on any sailboat can tax your patience, so that's when good company is nice to have. An up-side of the slow moving is that we were able to see Indian River Redfish tailing, dolphins porpoising, and alligators watching all the action. We were supposed to meet our kids on another one of the barrier islands. After about an hour of moving slow as a turtle, we called our kids and had them come tow us with their motor boat. That was a little jarring to my Sailor's ego, but it was fun.

Right when we got to the island a storm started coming in with lightning bolts in the distance. That's when we decided we were going to be there for a while, so we tied everything down real good and enjoyed a good lunch with all the kids, while the grandkids looked for shells, snakes and bears on the tiny island. They only found shells, and the snakes and bears just turned out to be rumors.

The storm finally passed, and we were able to catch a few good breezes on the Wave again for a little while and then we headed in for good. That's when my daughter Melissa stopped by with her daughter Maddie, fresh from the airport, home from Shenzhen China for a visit. Melissa is a teacher there. 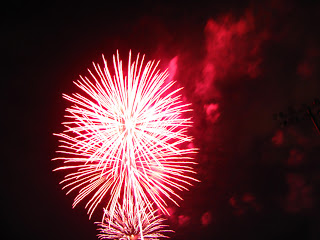 The Finale of the day was enjoying the small-town fireworks show with patriotic music in the background with our friends the Holtons, their friend Rusty and his hound pup Duke. They too have a son in the Marine Corps, so of course we talked about our boys, and all the kids, just enjoyed each others company and the spectacular fireworks show.
Posted by Mr. Gus at 10:23 AM