What a day? Is it almost over yet?

Camp has been so much fun this week, not just for me but I think the kids had a great time too! We only had one child go home early due to homesickness I think. No one went home due to behavioral issues, as sometimes happens. In my 7 years as a 4-H Agent, including about 15 summer camps, about 10 kids have had to have their parent pick them up early. Not a bad average, but 1 is too many.

At 4-H camp we hold very high standards for respect to others. When children have to go home due to disrespect, they've had multiple chances to correct their attitude. Enough of that!


The day started out again early with a few kids out and about about 6:45. At 8:00 am everyone is at the flag pole for Colors and by 8:30 we're eating and at 9:30 we've all begun on fun activities for the day. Today we had the same general activities as I mentioned earlier, but with the addition of geocaching, and a muzzle loading rifle demonstration after dinner. The kids who got to try it include Josh B., Ethan L., Janoah, Eli and parent volunteer Ms. Sheryl. Sheryl's son Fabian didn't get to shoot because he was too young. We all felt bad. Mr. Cooper the Camp Director was there, as well as Joe Menendez one of the camp staff. Poor Joe didn't get to shoot, because he had to go, but Joe and his brother Jake went to the National 4-H Invitational with me a few years ago. 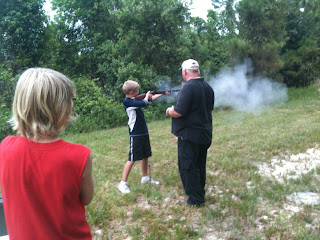 ALL THE KIDS HAD TO LEAVE at 6:45 pm sharp, because we had a dance tonight. Camp smelled soooo good, and the kids all cleaned up very nice! Left is Josh shooting a Missouri Trade Rifle, a 50 caliber black powder gun at the camp gun range.
Posted by Mr. Gus at 9:37 PM