How young is too young to take a child shooting?

There is a reason these guidelines have been put in place.  They weren't just concocted by some non-shooters who are trying to hold kids back.  On the contrary, the National 4-H Shooting Sports Committee who set this standard is made up of some of the finest Educator/Shooters in the country, with representation on the committee from the NRA and industry. 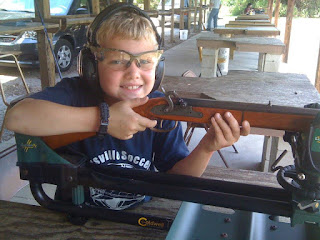 This past weekend I had a great time teaching my 8 year old grandson Gavin how to shoot a black powder rifle, and since it was not a 4-H program, I was okay with the laws and liabilities of the situation.  Prior to going, I was not quite sure how he would handle it.  Once or twice before I taught him the basics or air rifle handling in the backyard, so this was quite a few steps up in complexity and power.  He did very well to make a long story short, but that is because his Papa Gus helped him every step of the way, quizzing him on safety, parts and procedure the whole time.  Was I able to shoot too?  Of course I was.  Utilizing the Coach-Pupil method of teaching, I had him coach me, just as I had him - every step of the way, reinforcing his knowledge gain.  The other part that I was concerned about, and was not sure until I tried it, was using the Caldwell Lead Sled to help him make his shots.  This wonderful tool took almost all of the recoil of the gun away, but allowed him the flexibility to adjust his own sights, and shoot the gun himself.  I first learned about the Lead Sled at the 2009 Orlando SHOT Show, but they can be purchased at most stores that sell quality shooting gear.

I need to point out that even though these are the recommended ages for 4-H, they differ for other youth programs, and sometimes within the same program but state to state and county by county.  Check with your local youth leadership professional to be sure.  Some programs are more or less stringent, but I think they're about right.  No child is however too young to learn about the dangers and risks involved with guns and anything that shoots a projectile.  Kids are killed virtually every week with air rifles, airsoft and paintball guns.  They should all be respected, and every member of the household, oldest to youngest should know The 3 Always of 1) Always keep the firearm pointed in a safe direction, 2) Always keep the gun unloaded until you're ready to use it, and 3) Always keep your finger off the trigger until your sights are on the target.

There are some excellent articles and helps written on the Ages and Stages of kids.  My very first reference for this is the Univ. of Florida EDIS publications on teen development.  Another great site for this is HealthChildren.org.